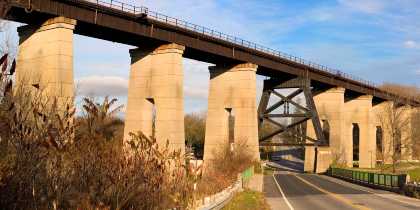 Included below are homes for sale in St. Thomas, Ontario. If you would like more information on any of these St. Thomas, Ontario real estate listings, just click the "Request More Information" button when viewing the details of that property. We can provide you with disclosures, past sales history, dates and prices of homes recently sold nearby, and more.

And, if you haven't already, be sure to register for a free account so that you can receive email alerts whenever new MLS listings come on the market.

The city was named for Thomas Talbot who, in the 19th century, actively promoted its development. St. Thomas became a major railway junction in the late 19th century and early 20th century. A total of 26 railways passed through the city since the first tracks were laid in 1856.

Located east of London, Ontario and major highway 401, St. Thomas has become an ideal location for commuters, though boasting a thriving economy of its own.

Areas of St. Thomas are continually expanding with new subdivisions and neighbourhoods begin developed. Its ideal location to London and the 401 have many buyers considering a move to St. Thomas as it boasts “25% more life” for those who live there.

Real Estate in St. Thomas remains relatively affordable with housing options ranging from condominiums, townhomes and single or multifamily dwellings. Though averaging a list price of $525,000, homes in St. Thomas can be found starting in the low $200,000’s.

On the higher end of the scale, homes in St. Thomas can be found nearing the $1 million dollar mark, and generally feature acres of land located within the rural areas.

After the decline of the railway, St. Thomas saw a surge of manufacturing and automotive plants. In recent years, the economic landscape has changed in St. Thomas, with the closing of the Ford Plant. Residents of St. Thomas, now more than ever, commute to London for work. However, with direct access in approximately 15 minutes to south London via Highbury Ave., Wellington Road, and Wonderland Road, commuters are enjoying a relatively low travel time.

Those wishing to further their education post secondary school can enjoy the courses and programs offered out of the St. Thomas campus of Fanshawe College located next to St. Joseph’s High School.

Expedia.ca named St. Thomas’ downtown as the #1 coolest downtown and residents of the city would have to agree. Between the art gallery, craft breweries, local theatre and wide array of shopping and dining, the downtown core has something to offer everyone.

The city is also home to Canada’s first and only elevated park towering 95 feet above the Kettle Creek Valley,  the former MCR bridge is in the beginning stages of the park. St. Thomas also features of number of neighbourhood parks dotted throughout the city as well as Pinafore Park and Waterworks Park, both featuring splash pads, walking trails and play equipment.