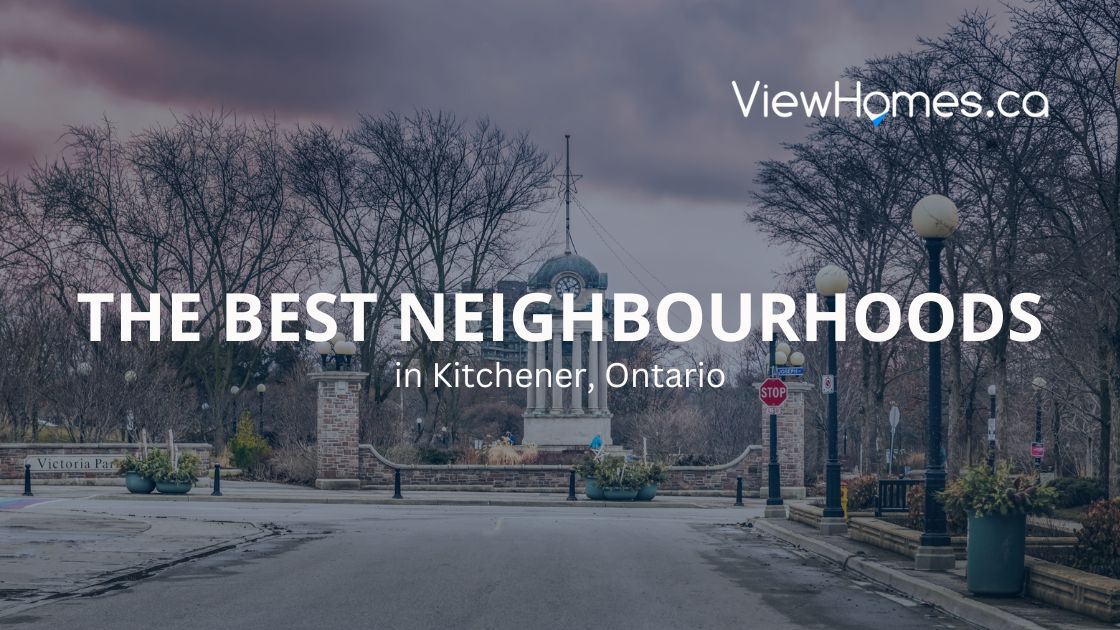 If you’re thinking of moving to Kitchener, Ontario, the next question might be: which neighbourhood is best for me? Kitchener has access to excellent transportation options, great schools, an exciting urban core and tucked away green areas surrounded by parks and trails. Diversity like that is one of the many reasons Kitchener is growing in popularity. The city is known for its innovative technology industry, post-secondary institutions and its proud German heritage. To help in the search for the perfect neighbourhood, we’ve put together a list of the some of the most sought-after neighbourhoods in Kitchener, Ontario. They are categorized by features as varied as the city itself, so there is plenty of opportunity to find your dream neighbourhood!

Looking for a Home in Kitchener?
Search Now

The Best Neighbourhood for Commuters:

One of Kitchener’s strongest assets is how well connected this city is. Residents appreciate its central location in southwestern Ontario and being close to the Greater Toronto and Hamilton Area by the 401 Highway. Traveling around Kitchener is made easy by a network of bus routes and further improved by the recent ION light rail innovation that connects key points between Kitchener and Waterloo. When it comes to a commute, starting from the right location can make all the difference, so living close to one of Kitchener’s many transportation options is key.

The 401 Highway is Kitchener’s important connection with the Greater Toronto and Hamilton Area. The 401 runs south and east of Kitchener before crossing Cambridge to the east. The 401 Highway is the best way for residents of Kitchener to reach Woodstock, Hamilton, Burlington, Milton, The Toronto Pearson International Airport in Mississauga and Toronto. It’s no wonder that access to such an important transportation route would be high on the list of so many home buyers in Kitchener.

If accessing the 401 is your top priority then consider looking for a home in a neighbourhood like Doon. Doon - and especially the Doon South subdivision - is popular for its relaxed, suburban pace and family-friendly atmosphere. Doon South is located in Kitchener’s southeastern corner and it connects with the 401 highway by Homer Watson Boulevard. In addition to highway access, residents enjoy being near nature and important heritage areas. Most of the homes in Doon South are newer detached single-family homes, but there are a healthy number of new condominiums in the area as well.

In general, living Doon is more friendly to vehicle owners. The neighbourhood is one of the newer residential areas in Kitchener and  many of the homes on the southern end of the neighbourhood were built in the last five years. This means that there aren’t many amenities right around the corner from Doon South. Residents with vehicles will have an easier time connecting with the rest of Kitchener and running errands in the north. Doon South is a good place for families since it is quiet, but has good school coverage and attractions for family fun like trails through the Doon Creek Natural Area in the centre of the neighbourhood as well as a Community Library and the Doon Heritage village to the north in Pioneer Park.

The light rail connects Kitchener and Waterloo along an express route. The southern end of the route is Fairway Station in Kitchener while the northern end is Conestoga Station in Waterloo. Stops in between provide commuters with access to various hubs in both cities as well as the Universities. This is an efficient way to travel between the commercial cores of the two cities. Being close to an ION station is a sought-after feature for many home buyers looking for a piece of that convenience. While the ION stations are accessible by bus, living in Kitchener’s South Ward area puts residents close enough to the route to walk.

Kitchener’s South Ward is an area of central Kitchener that includes many of the neighbourhoods between Downtown Kitchener and the Conestoga Parkway to the south. This residential area is located  around the southern end of the ION light rail tracks and there are a variety of stations accessible to residents. For those who don’t want to live in Downtown Kitchener, choosing neighbourhoods closer to the Mill Station to the east of Ottawa Street will provide some distance.

The South Ward area is popular for other conveniences as well. This central area is close to Downtown Kitchener in the north and access to the Conestoga Parkway in the south. Homes in South Ward tend to be older with a range of styles available. There are single family century homes and multi-family options like duplexes and condos which are some of the more affordable property types in the Kitchener-Waterloo area.

The Best Neighbourhoods for Families:

When looking for the perfect neighbourhood for your family, there is a lot to keep in mind. Are you on the lookout for the best schools in the city, nearby shopping for maximum errand-running convenience or a quiet pocket of neighbourhood parks and an active, welcoming community? The western neighbourhood of Forest Heights is sought-after by house-hunting families for all of those factors and more!

The Forest Heights neighbourhood on Kitchener’s southwest side is a popular area for families because it offers a quiet residential area, fantastic local spots for errands and family outings and some of the best schools in the city.

Forest Heights is bound by Highland Road West to the north, Fischer-Hallman Road to the east, the Conestoga Parkway to the south and Trussler Road to the west. The residential core of the neighbourhood is complimented by community parks and nearby quality schools. Forest Heights Community Trail is the perfect place for residents to walk the length of the neighbourhood without worrying about streets and cars. The trail weaves through Forest West Park, Driftwood Park and Meadowlane Park while connecting them with different residential streets. Another convenience for residents of Forest Heights is the Highland Hills Malls in the northeastern corner of the neighbourhood along Highland Road and Fischer-Hallman Road. This one-stop shopping destination includes a Real Canadian Superstore for grocery shopping, other retail options and several take-out restaurants.

The Best Neighbourhoods for Beautiful Scenery

The views and landmarks unique to a city can often be some of the most popular areas for home buyers to look for a property. Whether you’ve fallen in love with the atmosphere of downtown Kitchener or prefer a more natural background outside your window, there is a beautiful blend of scenery to choose from in Kitchener, Ontario.

If night lights and sky-high buildings are the perfect backdrop to your life, then an apartment-style unit in downtown Kitchener is the best option. This area is the commercial core of Kitchener with popular amenities like the ION light rail service, Kitchener Public Library, THEMUSEUM and Victoria Park within walking distance. Living in downtown Kitchener means either living in the older single family properties just outside of the main street or more recently built, but smaller apartment-style condo opportunities in and around the core.

For those who love the great outdoors, the Idlewood neighbourhood combines forested trails, access to outdoor adventure and views of the Grand River. Idlewood is located in the east end of Kitchener. It is north of the ON-8 highway, south of Victoria Street North and west of the Grand River. Idlewood is a suburban neighbourhood with secluded residential streets that wind around Springmount Park in the centre of the neighbourhood. Most properties in Idlewood are single family homes with options for bungalows and larger two-floor homes as well. Living in the east end of Kitchener puts residents close to Cambridge, the Region of Waterloo International Airport and the Cambridge Butterfly Conservatory.

Residents can look forward to walking through the trails through the central Springmount Park for an outdoor workout in the neighbourhood. The Idlewood Creek that flows through Springmount has the added perk of photographing well in every season. Looking just outside of Idlewood, the Grand River is located a few minutes east of the neighbourhood. It is accessible by road or by following a network of trails to the Grand River Natural Area to the southeast. Another popular destination close to Idlewood is the Chicopee Ski & Summer Resort which offers downhill skiing and snowboarding in the winter months and cycling trails and beach volleyball among other warmer weather activities during their green season.

The Best Neighbourhoods for Stylish Homes

The City of Kitchener is known for its heritage areas as well as its newer development as the city expands. Whether you are looking for an older home decorated with charm and character or a brand new property built with modern architecture and appliances, there are plenty of opportunities in Kitchener’s diverse neighbourhoods.

Both South Ward and West Ward are excellent areas to begin searching for an older gem. With both areas so close to Downtown Kitchener, they are also some of the oldest residential areas in the city. There are larger homes converted into multi-family properties alongside detached properties with historic exteriors and fashionable, updated interiors. There are even opportunities to score an older fixer-upper in these established neighbourhoods in the heart of Kitchener.

What's Your Kitchener Home Worth?
Find your home or condo's value in today's market, for FREE!
Find Out Now

The South Ward and West Ward are also great areas to live for people who want easy access to Downtown Kitchener for work or leisure. Another benefit of living in central Kitchener is access to the best of what Grand River Transit has to offer. There are established bus routes through these areas as well as connections to the nearby ION light rail stations for reaching Waterloo as well.

Huron Park is a subdivision in southern Kitchener and one of the newest areas in the city to be developed. This modern neighbourhood is located south of Bleams Road, east of Fischer-Hallman Road and west of Strasburg Road. The main feature of Huron Park is the beautiful Huron Natural Area which blends forest trails, views of the water and family-friendly playgrounds. The residential development in Huron Park resulted in both detached single-family homes as well as a good number of condo buildings. The area of Huron Park south of Huron Road is the site of the most recent development in the area where a brand new subdivision is in the works.

Houses aren’t the only new features of Huron Park. As Kitchener’s population has increased, the city’s development has been expanding outward, bringing a new surge of population into the areas on the edges of the city. With residential development and increasing population, this means that amenities are needed to service these new areas as well. The schools in the south of Kitchener are newer as well including Huron Heights Secondary School which services the residents of Huron Park. While these areas tend to be quieter suburbs, the peaceful residential streets, nearby parks and brand new schools are great for families as well.

Kitchener, Ontario is a beautiful city that is growing to meet the demands of many different types of home buyers. There are neighbourhoods that take advantage of the best urban and natural features of the city as well as its stellar network of public transit.

If you are looking for a mid-sized southwestern Ontario city with beauty and potential in spades, then Kitchener, Ontario should jump right up to ...Read More

Kitchener is a lively city with a considerable number of elementary schools. If you’re making a move here, it’s important that ...Read More